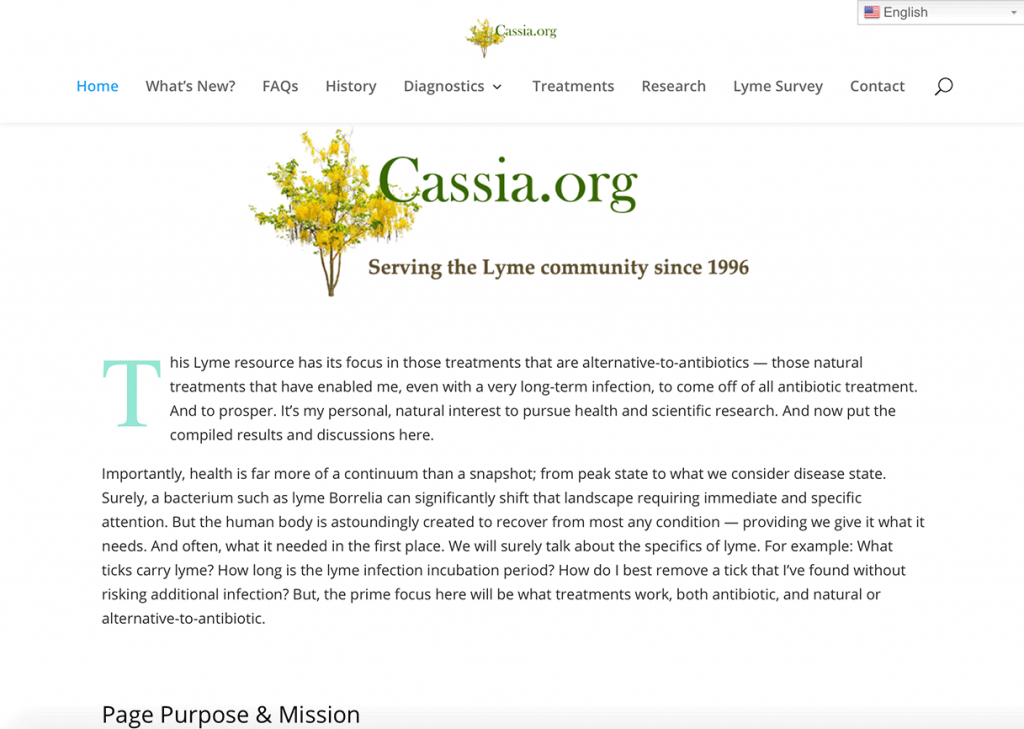 Cassia.org is the first website we ever developed, well over twenty years ago now. Yes, that was early on in the life of the web, and the site has seen several iterations since. In that early era, the Internet had just moved away from the prime communication format of that time, the bulletin board; and websites were just beginning. They were static things then, plain text on a page with spare images. Website production software had not yet been developed (Microsoft’s Front Page would soon be the first) and all html coding had to be done by hand: If you wanted to put a certain thing in a certain place, you had to code it there.

The purpose of this website was to disseminate information on Lyme Disease, with a specific focus on diagnostic information and alternative treatments (alternative to antibiotics) that were finding success. The site quickly found an international audience, and continues to serve that community to this day.

While even now the site remains of a fairly static design—pictures and information—at one point this ranked for years on the first page of Google for many of the terms related to Lyme. In fact, the site’s ranking itself, on the popular search engines of the time, predated Google’s existence.

As the web progressed, both in terms of features and multiple viewing devices, Cassia began to drop from what had been about 60,000-some unique visitors per year. This came during a period of intense, alternative employment, whose personal demands required this to languish. Later on, we would periodically return to this page and upgrade the features, the most important of which (at least from a ranking point of view) was the ability to spin up a rendering based on whether one viewed it from a desktop machine, or even mobile viewports—to be “responsive,” as it is known.

Even so, its various sub-page article areas continued to experience top rankings for years; and the site was a driver of much of the information that is out there in this community to this day.

In the course of time, we stumbled across what types of things would find high rankings and viewers—which are usually one and the same thing, by the way. And the page became a resource for one of the prime Lyme-diagnostic essays of all time—something that was later copied widely on the web—and which we had to aggressively move to protect. While information is free, our site design had a future plan to implement a health survey, and it became important then to not just “give away” the traffic, but to retain it to the site.

At this point, the site is still in process, and even the site linked here is a version ending in a “WP” subdirectory, where it is being worked up until the future version is brought forward. The survey is finished in Beta form, and now promises to eventually glean two very important pieces of information:

One day, perhaps soon, as client demands permit, we will finish the in-construction state of design and allow it to sit free as a significant resource.